When a couple decides to live together, they usually do it for reasons of love and the last thing on their minds is the financial status of their partner. Because love is often blind each partner may bury their heads in the sand in regard to the other’s financial stability at least for the time being. This can be a big mistake. There is much evidence to suggest that debts are a major problem for couples who decide to co-habit or get married and can be a significant cause of subsequent separation and divorce.

If one of the parties has a significant level of debt which they have not disclosed to the other party, this can be a source of strain down the line and can even lead to a serious loss of trust between the partners. If both parties have significant debts then perhaps they can address their problems together but disclosure before moving in together is still preferable.

Even in cases where one partner discloses to the other that they have serious debt problems, the couple may still decide to co-habit or get married in the optimistic hope and belief that ‘love conquers all’. There are many different scenarios that can arise. For example, one of the parties may own the property where the couple proposes to co-habit. They may own the property outright or they may have a mortgage on it.

Assuming that each of the parties has been open and honest about their finances and has fully disclosed all relevant financial matters to their proposed partner, it may be wise to consider entering into a prenuptial agreement or in the case of co-habitation a simple legal agreement that would set out the financial implications in the event of future separation.

In a worst case scenario, where each of the co-habiting persons are or become insolvent, two of the most commonly availed of solutions in the UK (England, Wales and Northern Ireland) are to petition for bankruptcy or enter into an IVA (Individual Voluntary Arrangements) with each party offering their own separate IVA but with the two IVAs being interlocking (also referred to as a joint IVA) showing the mutually intertwined nature of the couples finances. Creditors of course must accept both sets of proposals when they are interlocking. If creditors approve one proposal and reject the other, then both sets of proposals are deemed to have been rejected. 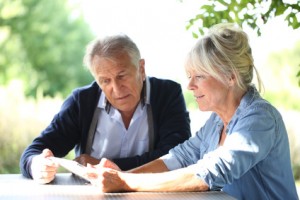 Interlocking proposals recognise the mutual financial dependency of the partners. Typically, each partner will have his or her own personal creditors and the couple may have one or more joint creditors. Each partner may have their own assets such as a car and they may jointly own assets such as a house. The financial details of the partners provided in each of their IVA proposals will therefore differ to some extent in relation to liabilities and assets. Usually however, the financial details will contain a joint Income & Expenditure statement in which the joint living expenses of the couple are met on a basis proportionate to each partner’s individual income.

For example, if one partner’s net income, after tax & National Insurance deductions, is twice that of the other partner, then the joint Income & Expenditure Statement will show one partner paying two thirds of the household expenditure and the other partner paying the other third. The calculation of each partner’s disposable income or DI will result in the higher earning partner’s DI being twice that of the lower earning partner.

From the point of view of creditors, such interlocking proposals for IVAs are often attractive, since administration costs will usually be significantly lower than they would be if each partner were to offer a proposal for a ‘stand alone’ IVA. There are also benefits of simplicity where jointly owned assets, such as the equity in a house, can be dealt with in a mutual and consensual way, which might not be the case in two ‘stand alone’ IVAs.

While love might not conquer all in financial matters, it certainly helps to ensure that interlocking IVA proposals have a much greater chance of being approved by creditors and being completed successfully in supervision.