In our first three articles in this series, we looked at Debt Consolidation, the Debt Management Plan and the Individual Voluntary Arrangement as three of the main approaches for dealing with personal debt problems. In this fourth and final article we will briefly look at the last of the main processes that are specifically targeted at debtors who are insolvent i.e. Bankruptcy.

Just like an Individual Voluntary Arrangement, Bankruptcy is a formal insolvency process and is considered to be a remedy of last resort. You can declare yourself bankrupt or one or more of your creditors may bankrupt you. Your local CAB can assist you in obtaining and lodging the necessary papers in court if you decide to bankrupt yourself, a process known as a ‘Debtor’s Petition’. There are some fees and costs which you will have to pay yourself when lodging the papers. Currently these total less than £1,000. If the bankruptcy order is granted by the court, control of your assets passes to an officer of the court, called the Official Receiver who will either deal with your case or appoint an Insolvency Practitioner (who for this process has the title of Trustee) to deal with your case. The Official Receiver or Trustee then investigates your financial situation to determine your ability to repay your debts. If this is the first time you have been made bankrupt and if you co-operate fully with the Official Receiver/Trustee, you will be discharged from your bankruptcy within twelve months and any amounts still owing to your creditors have to be written off by law. 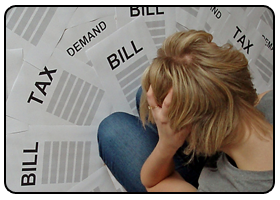 Bankruptcy may well be the best solution for you if you have no assets such as a house or other such property, are not employed in a professional capacity and if you are on a low income. If you have a high income you may prefer debt consolidation, a debt management plan or an IVA instead but if you opt for bankruptcy you may be subject to an Income Payments Order for up to three years, notwithstanding the fact that you will be discharged from bankruptcy within twelve months. Remember though that the purpose of bankruptcy is to protect you from your creditors.

There are some additional remedies for personal debt problems other than the big four which we have already described. For example there are Debt Relief Orders which apply to people whose total debts are less than £30,000, who have no assets and whose disposable income is less than £75 per month. Whatever you do, take advice from competent advisors and try to avoid opting for the first solution suggested to you. It pays to shop around and to fully consider all the alternatives.